Posted on December 18, 2016 by markbrightwell 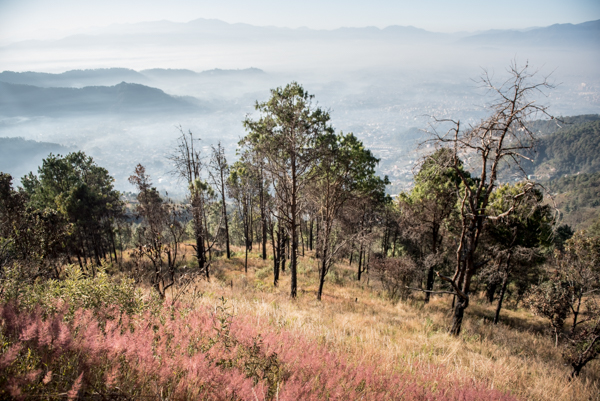 It’s my second morning in Nepal and at 5am my sleep is penetrated by an alarm; nothing untoward, just the timeless “beep-beep, beep-beep” of my Casio announcing that it’s time to move: the Kathmandu Ultra awaits.

I ride across town in the darkness. The rhythm of my Enfield’s single cylinder taps a familiar beat and carries me smoothly through the empty streets of Kathmandu. I arrive at the house of Chechi Rai (née Sherpa), a formidable Nepali runner from the Solukhumbu.

The alley way is dark and the gate locked. No sign of life within. I call out and wait. Still nothing. As we’ve little time to spare, I climb awkwardly over the spike-topped gates and into the compound.

Upstairs two year old Dawa Alex is crying, indignant at the prospect of being deprived of his Mum for the day. Chechi comes down and we thread our way back through the dark courtyard to the bike.

It’s a long ride back across town and out to the North. By the time we reach the gates of Shivapuri National Park I am well and truly chilled. Although we made it on time, in true Nepali style, not many others did. The bus laid on by Trail Running Nepal has taken a wrong turn and Richard, the race organizer can only apologise, quipping that the bus driver has probably gone to his ex-girlfriend’s house.

Lizzy Hawker checks in the runners

To the sound of cheers the errant bus eventually arrives, a race brief ensues, we are checked in through the park gate and it begins. The 50k runners take to the start line first, followed by the 27k and 12k (the lunatics doing 80km started at 5am) 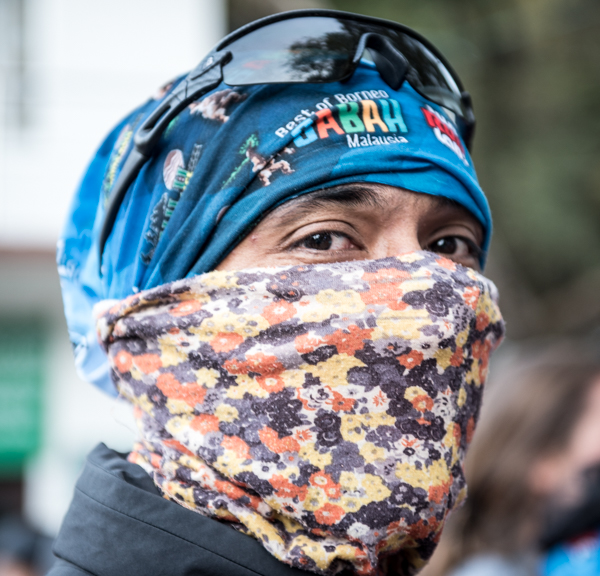 Our route starts with a climb of zigzagging stairs before reaching a traversing trail along which the 50k-ers break away, leaving the shorter distance runners to continue a more direct ascent. 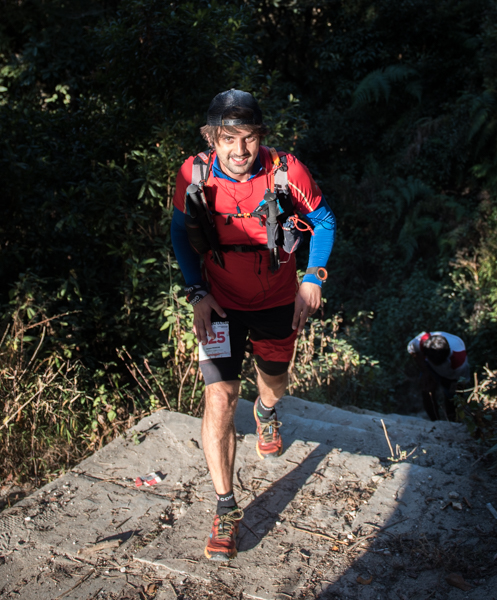 First of many staircases!

Along the traverse the scenery is beautiful. Early morning sunbeams cast long shadows across the waking city below and I’m not alone in stopping to take a photograph here or there. Indeed, for several minutes I forget running entirely and engage in a playful photo shoot with some snotty nosed children. They lean in on me from all sides, hustling for the best view of the camera’s LCD and spinning away with peels of laughter on seeing their image or that of their friend or sister.

The moment passes and I resume running, reaching the first check point after several further kilometers, during which time I meet Anne, a British Doctor who has just spent the trekking season at Pheriche working at one of the Mount Rescue Association’s Aid Posts.

Beyond the check point the trail leaves Kathmandu Valley behind, wrapping around the back of the Shivapuri massif, climbing and descending through a series of jungled ridge lines and saddles, to ultimately arrive at the biblical stone staircase that leads to the 2750m Shivapuri summit. 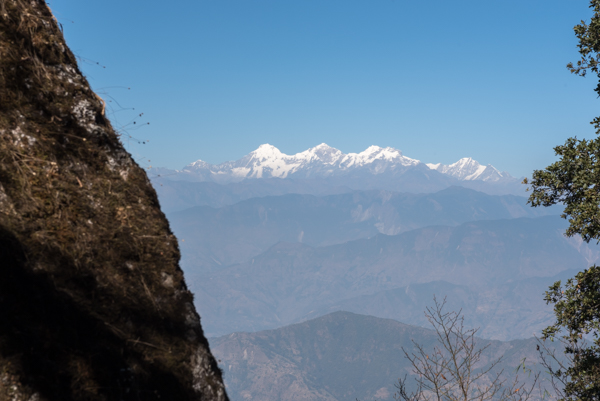 During this stage I’ve flick-flacked with a couple of runners, including Chechi who’s going well in spite of minimal training and what I can only image is the tiring burden of breast feeding a two-year old.

Further up the great stone staircase I catch up to another female Nepali runner with whom I share water and a few encouraging words.

There’s little to linger for at the summit as unchecked jungle hinders what would otherwise be spectacular views. We drop off to the East, descending a few kilometers before reaching the second check point (22km).

The welcome shade of thick jungle

From here a 14km sector proves hard going. The sun is at it zenith and where until now we’ve been in shady jungle, the ridge lines here are exposed. About half way though this sector my mouth is dry and my strength is draining away. I sit down in the shade, drink deeply and enjoy a few moments of being still. Around me the trees are alive with what sound like parakeets. Every now and then a cooling breeze moves through the canopy, dislodging dry leaves which fall to the forest floor where they crackle underfoot.

The dusty trail now descends: down steps, through gullies, past an army camp and ultimately back to the inhabited flanks of the Kathmandu Valley. The terrain is unforgiving: stone steps and sun-baked earth – little give in either. My focus is entirely on moving lightly and efficiently. Finally an intersecting traverse is met and followed. Running inclines has become too much effort. It’s all I can do to maintain a running gait on the flat. Turning a corner, the third check point is a welcome sight.

I take on another flapjack, some salty biscuits and plenty of jivanjal (an oral rehydration salt).

The marshal is a very chatty and helpful young man. He’s happy that I speak to him in Nepali and asks where I’ m from. It turns out that his family is now living just a few miles from where I grew up, in Hampshire. He tells me he’s just met another Brit, a chap from Wales who passed through about 15 minutes ahead of me. This must be Ann’s husband, Peris.

I’m about to move on when to my surprise, Chechi appears, looking as fresh and cheerful as ever and having clearly smashed the descent! On the climb to Shivapuri she’d appeared to be struggling. And given how little opportunity she’s had to run, I’d been wondering if encouraging her to race today had been the right thing to do. I needn’t have worried. My concern now is to keep ahead of her!

The climb from this third check point is only a shallow gradient but until the jivanjal kicks in, it’s all I can do to lean into my poles and stride it out. As the minutes tick by and my system starts to absorb the fresh fuel, I rally, finding once again a healthy and sustainable rhythm. Indeed after a few more kilometers I am catching the man I assume to be Peris! He is duly surprised by how much I know about him but pleased to hear that I’d been running and chatting with his wife, albeit some time ago. We chat for a bit but my body now no longer wants to walk and I run on.

To our surprise there’s a check point around the next bend, on about the 41km mark. The profile marked on our race numbers is strangely out of kilter with what we are experiencing and in our weary state there’s no making sense of it – so I don’t trouble myself to try!

I’m now descending on a dusty vehicle track, all runnable. I relax and let gravity take me. To my further surprise a few fellow runners are walking back up the track towards me, having finished. They tell me it’s not far to go, perhaps only a few kilometers. Hmmm. The end is somewhat sudden. I’m psychologically prepped for at least 50k but just past 44k I turn a bend and recognise the start/finish line.

There’s a nice ripple of applause from other finishers and I’m adorned with a medal. Peris is a few minutes behind and Chechi just a few seconds behind him. After 7hours:50minutes, 44km and 2000m ascent the spectacle of a strapping Royal Marine having to sprint for position with a diminutive, breast feeding Mum was so tantalizingly close. Alas!

Anyway, what a fantastic way to be reintroduced to Nepal! A great, hard race. A great, friendly community. A well-set, well-marked course (all bar the 6km out and back which almost every 50k-er missed and most upsettingly, where the hot food I’d been so looking forward to lay!). And best of all, piping hot Nepali dhal bhat at the finish – my first in too long!

to Richard Bull, Lizzie Hawker, Mira Rai and all Trail Running Nepal’s staff and supporters who delivered yet another fantastic experience to yet another diverse international field. And for the phenomenal work that they put in towards nurturing this sport in Nepal, making the impossible possible for young Nepali runners.

to The North Face and Inov-8 for providing not only prizes but kit for aspiring Nepali runners who are being given nurture and opportunity by Trail Running Nepal and its supporters.

Ever the problem solver and pragmatist, Richard retrospectively split the 50km into the Kathmandu 50km and the Kathmandu 45km, with both races being recognised by the sport’s governing bodies and counting for equal points towards UTMB qualification. Chapeau!

This entry was posted in Uncategorized. Bookmark the permalink.